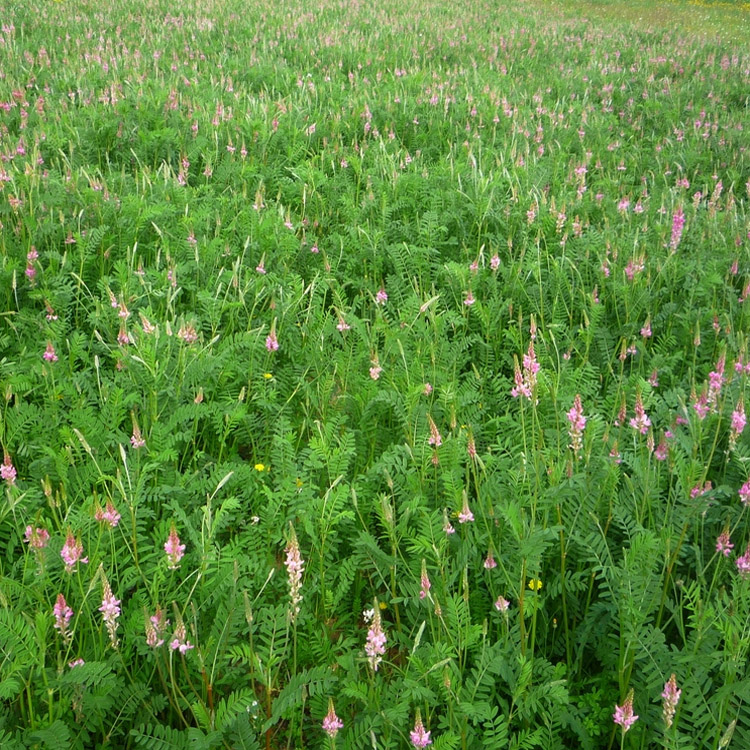 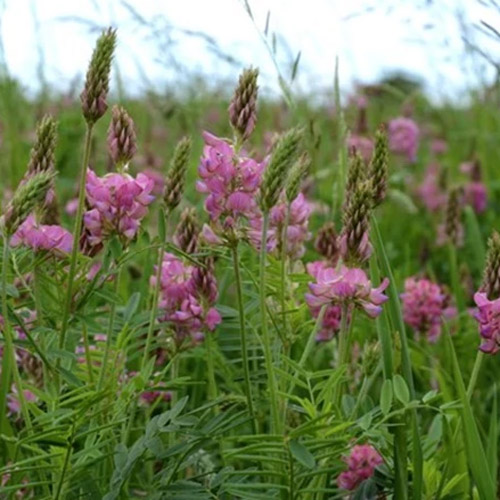 Sainfoin (Onobrychis Viciifolia) - A deep rooted perennial legume similar to alfalfa, but usually cut once a year. The hay is very desirable to many animals. It can be grazed or pastured and Sainfoin is relished by wildlife, especially deer and elk.  A prolific flower producer that is excellent for nectar and honey production and pollinators generally. With its extended flowering period and the fact that sainfoin produces more honey than any other legume makes it invaluable to pollinators, attracting a wide range of bumble and honey bees, butterflies and many other invertebrates. Bees feeding on sainfoin produce higher yields of honey.

Sainfoin grows taller than alfalfa, its stem is hollow, there are many leaflets (like a vetch) and its flowers, which are pink, are borne on a raceme. The "seed" used to establish this crop is, in fact, a pod which contains a single seed. Even without the pod, the true seed is large (for a legume); there are only 28,000 seeds per pound.

Sainfoin has good drought resistance and grows well on a variety of soils, it does especially well on high lime, well-drained soils of high fertility. However it does not do well on soils which are wet or have a high water table. It has a low tolerance to flooding, waterlogging or even high water table. It’s intolerant of acidity and salinity; however, it has good drought tolerance and winter hardiness.

Sainfoin is very palatable and is grazed by livestock in preference to alfalfa. It is relished by deer and elk. Although very coarse, the herbage is highly nutritious. Compared with alfalfa, forage dry-matter yields of sainfoin are about 20 percent lower under dryland conditions, and may be 30 percent or more lower in irrigated areas. Onobrychis species have never been known to cause bloat nor is it attacked by alfalfa weevil. It is highly palatable to both sheep and cattle, being preferred over alfalfa. It may be grazed or used for hay, either alone or in mixtures with grasses.

Sainfoin is a natural nitrogen fixator, so Rhizobia in root nodules of sainfoin fix nitrogen and boost soil nitrogen. The roots penetrate to great depths and pull nutrients up from the subsoil. Sainfoin has been found to increase the sequestration of nutrients such as phosphate. It is the ideal crop to sow ahead of cereals or brassicas in the rotation. It takes a year to get established so ideally in the first year it must not be grazed, or if necessary lightly grazed in autumn, and left ungrazed through winter.