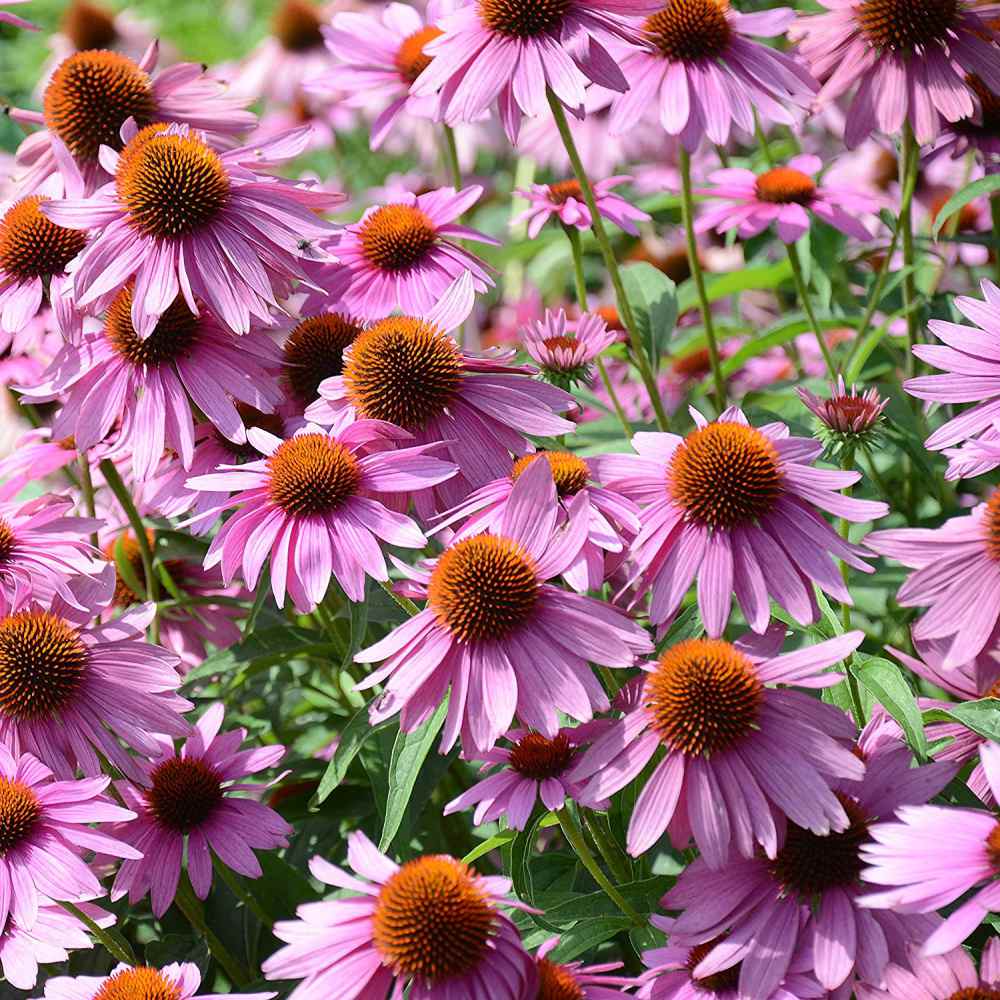 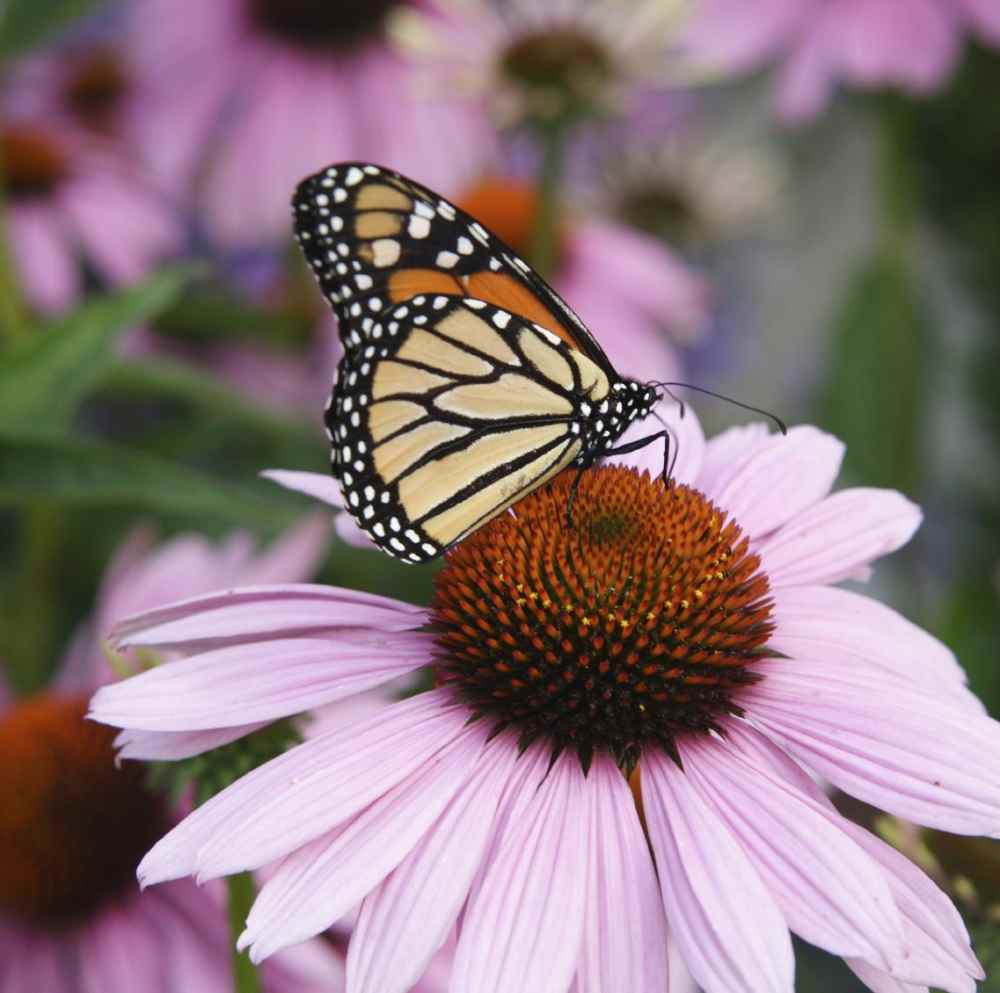 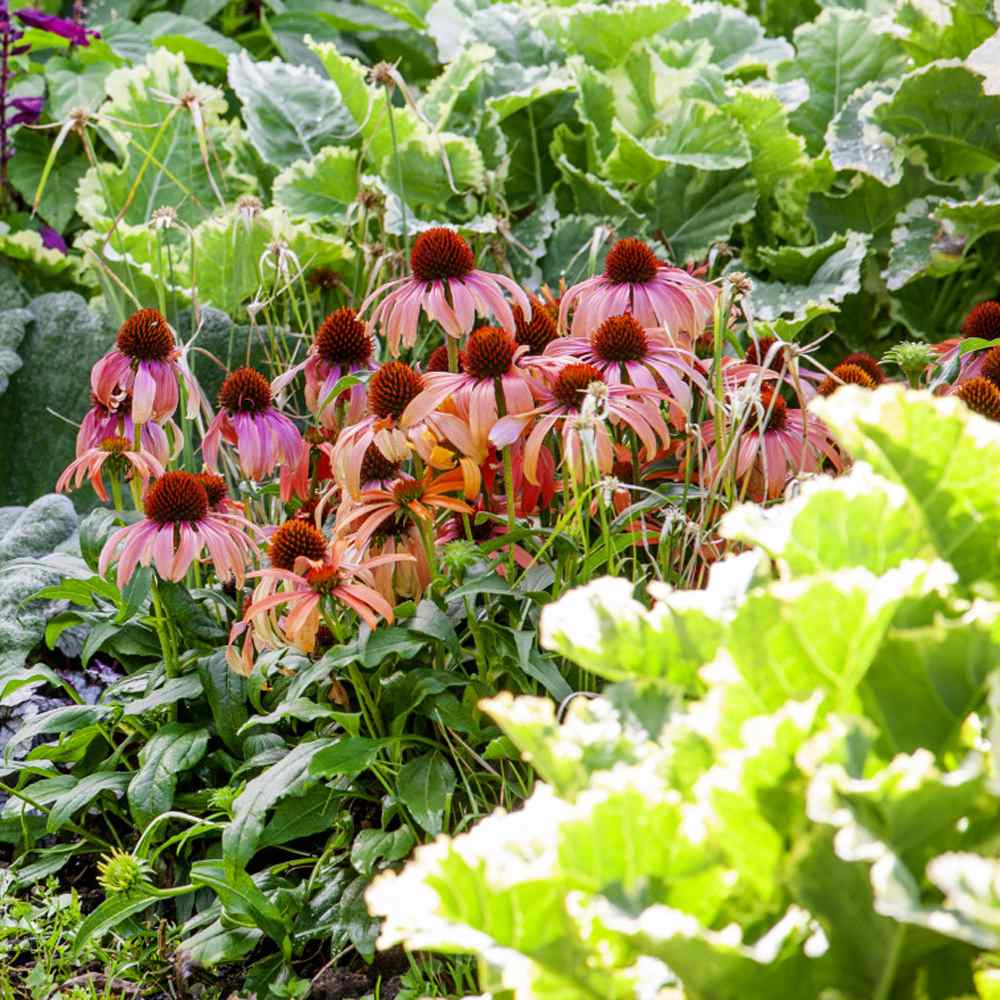 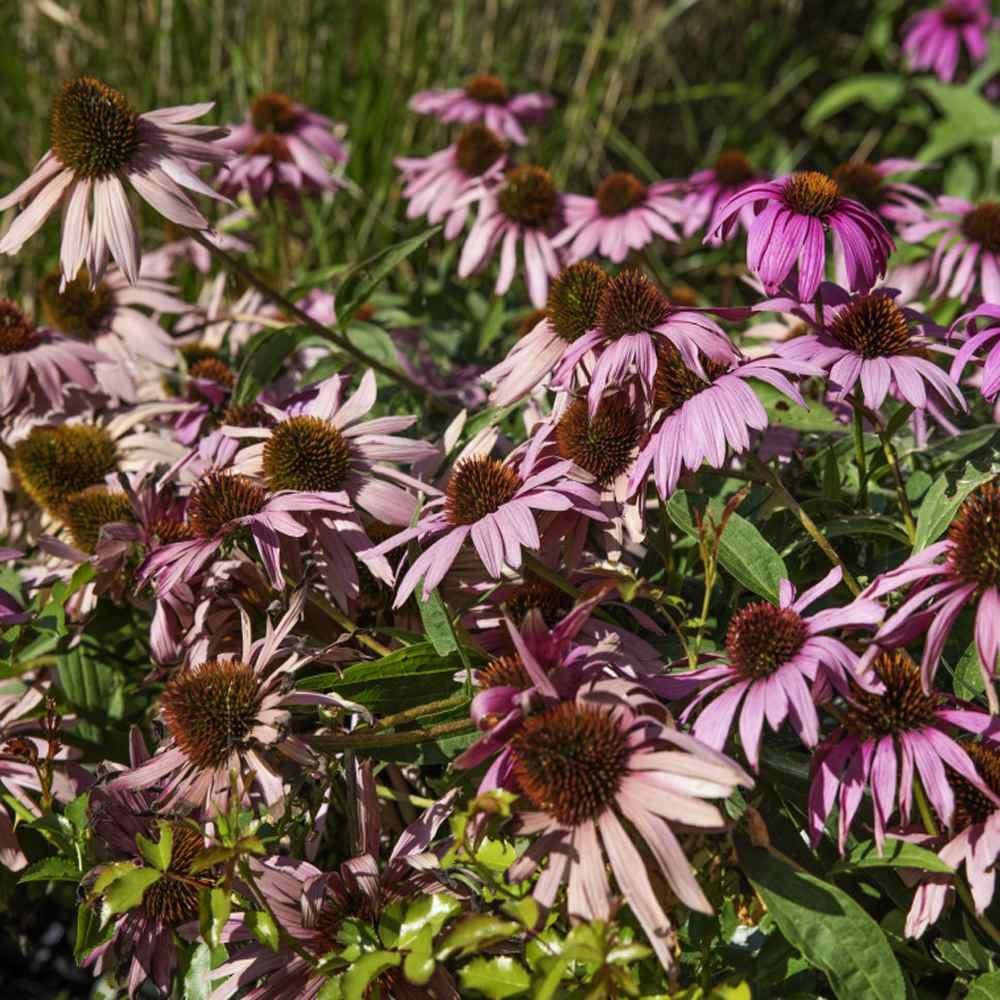 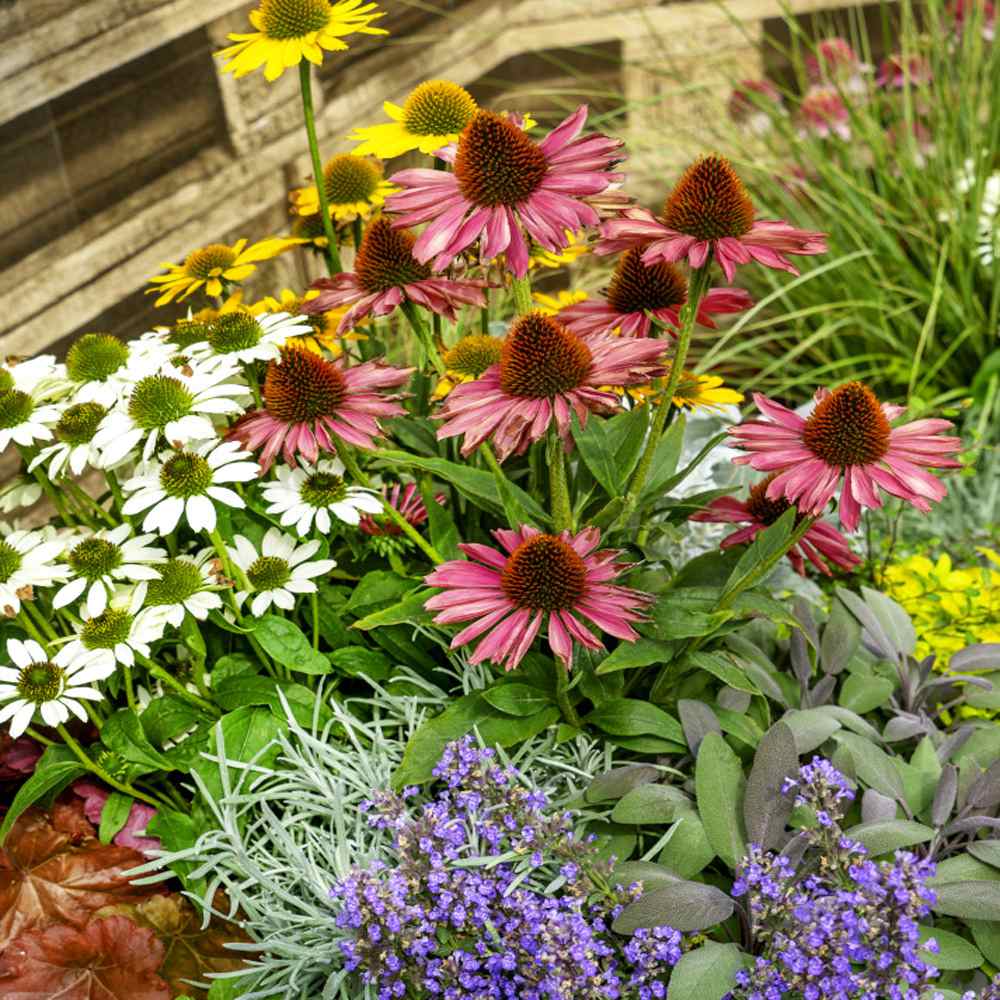 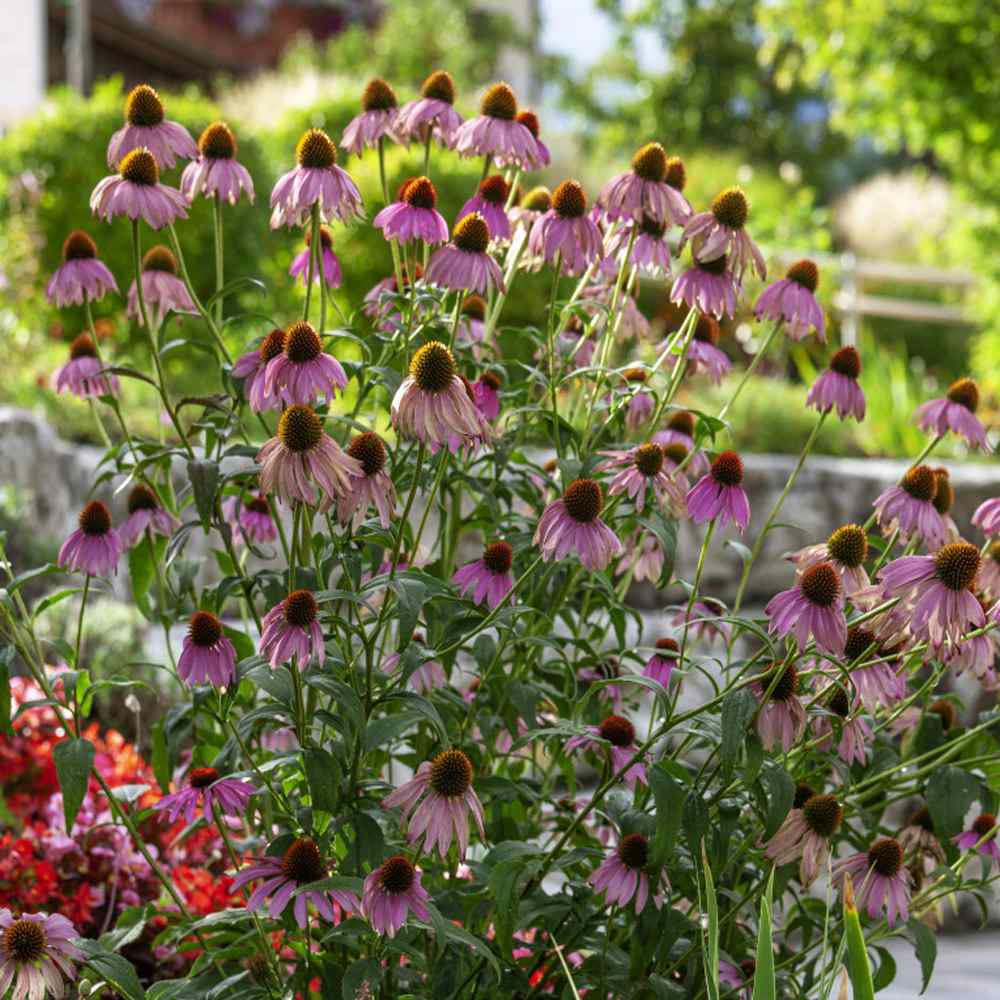 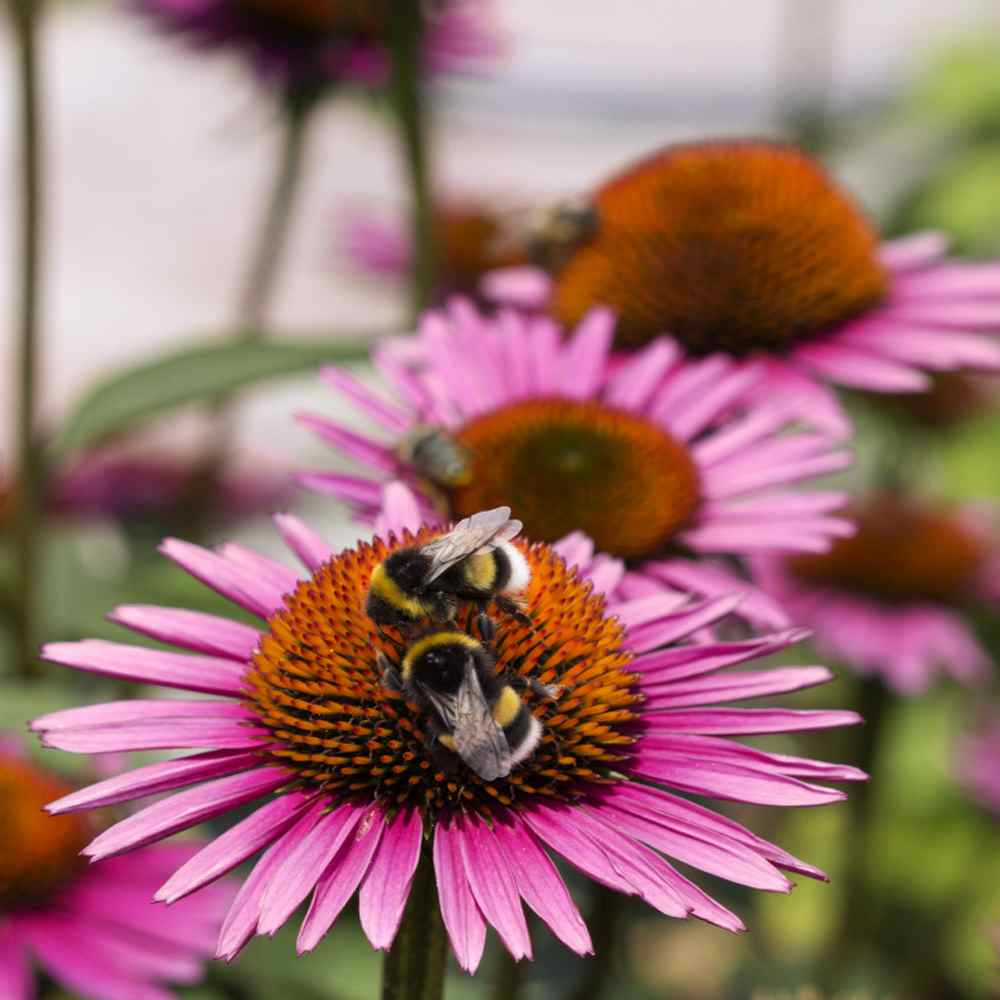 Purple Coneflower (Echinacea Purpurea) - Echinacea, (pronounced Ek-i-nay-see-a), commonly known as purple coneflower, is a herbaceous, drought tolerant, perennial plant with four species and six varieties all indigenous to North America, of which three, E. pallida var pallida, E. pallida var angustifolia, and E. purpurea, are grown commercially. Used in perennial borders for over 200 years, the species E. purpurea in particular is widely known, and it grows readily from Purple Coneflower seeds. Today, a move back to more natural tonics and medicines and our eclectic approach to health are contributing to a resurfacing of traditional uses of medical herbs such as echinacea. Some European countries, in particular Germany, are very familiar with the purple coneflower herb and have added many Echinacea herb products in the marketplace.

The traditional use of the Echinacea drought tolerant herb plant was considered helpful for the common cold, toothache, burns and external sores, sore throat, psoriasis, rheumatism, stomach cramps and to counter the effects of poison ivy and snakebite. It has more recently claimed to be a blood purifier, an anti-infection agent (viral and bacterial), an immune system strengthener, and snakebite antidote.

Purple coneflower wild flower seed species are found throughout central and Southeastern USA in open woods, prairies and along roadsides. The species E. pallida var. angustifolia makes its way up to South-eastern Saskatchewan and Southern Manitoba. This is quite tolerant of drought, though grows better in cultivation with adequate watering, and can tolerate fairly diverse soil types. The species E. purpurea enjoys moist areas and is often found along creeks and in seepage areas. Purple coneflower is generally indigenous to soils with a pH of 6.0-7.0. Selection of good sites will be important for this wildflower seed crop since it is a root crop and a deep well drained loam to sandy loam soil will be best for growing and harvesting. The extreme tolerances of physical and chemical soil characteristics are not known.

Purple coneflower generally has a deep fibrous root system and is harvested at three or four years old. All wildflower seed species have a spiny cone in the centre of the flower, (thus the name echinacea from echinos meaning hedgehog in Greek) and generally have light to dark purple drooping ray flowers (petals), though some cultivars are red or white. The coarse, generally hairy stems are mostly erect, either single or branched and from 24 - 36 inches tall. The basal leaves are generally slender with a long petiole (leaf stalk), to small leaves with no petiole at the top of the stem. It is important that you properly identify the purple coneflower wild flower seed species you grow and keep them separate as different parts are used from different species and they will cross pollinate.

Plants are generally started from wildflower seed. A soil mix of 1:1:1, peat, sand and soil by volume is suggested. Literature also suggests that surface or very shallow wildflower seeding gives better results as light has some influence on germination.

Echinacea Purpurea Purple Coneflower is not weed tolerant, thus weeding is an important factor. There are no herbicides registered for field grown purple coneflower, only ornamental and none are applied for, as the industry prefers to grow organically. One of the best ways to reduce weed problems in purple coneflower plantings is to prepare the land at least one year in advance. This should rid the soil of perennial weeds and reduce the annual weed population. This should also reduce the population of insects, such as cutworm and wireworm. The straw mulch suggested for outdoor wildflower seeding will not reduce weed occurrence to any extent, while weed infested straw may increase it.

Insects, diseases, slugs, snails, nematodes, etc., are not mentioned to any extent in any available literature. As with weeds above, no chemicals are registered for these pests on purple coneflower wildflower and if the industry wishes to use organic products, (such as BT, pyrethrum, rotenone, etc.) these will have to be registered and receive a PCP No. before they are legal. Planting purple coneflower wildflower seed too dense may increase the incidence of fungal problems, especially if plantings are protected causing poor air circulation.

Diseases such as fusarium, sclerotinia, pythium, phytophthora, and verticillium have been found on purple coneflower. The disease aster yellows is a problem on this wildflower and is spread by leafhoppers. There is no control for leafhoppers so rouging out infected plants is about the only thing you can do. If you are interested in more information on diseases, Alberta Agriculture has a good factsheet on this disease. See info.basket.gov and click on special crops, then search for echinacea.

Nutrient requirements are another area where little information is available for Echinacea Purpurea wildflower seed. A soil in the pH range of 6-7 is suggested as best. This will also give the best release of soil available nutrients and make the most effective use of applied nutrients. A general nutrient balance for root crops should be sufficient. Literature suggests that lower nitrogen levels give higher essential oil production, so this would be one element to pay attention to. It is also suggested that nitrogen be applied in three applications, not all at one time. A soil analysis done before applying any nutrients or soil amendments is necessary, and will at least show major deficiencies. This will give your Echinacea herb seeds the best chance of success.

This information is just a snippet from agf.gov. If you want the complete information just vist this link: Purple Coneflower