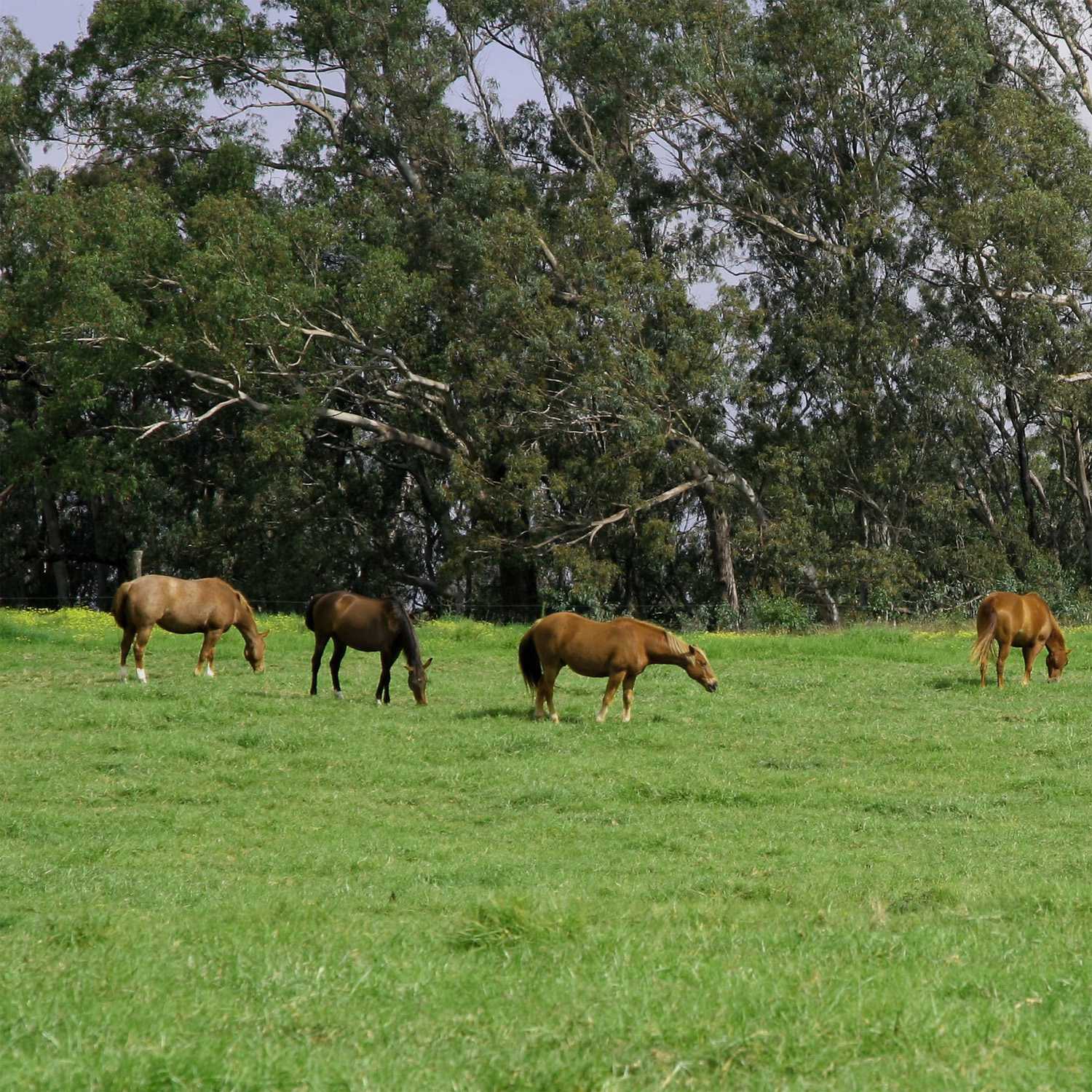 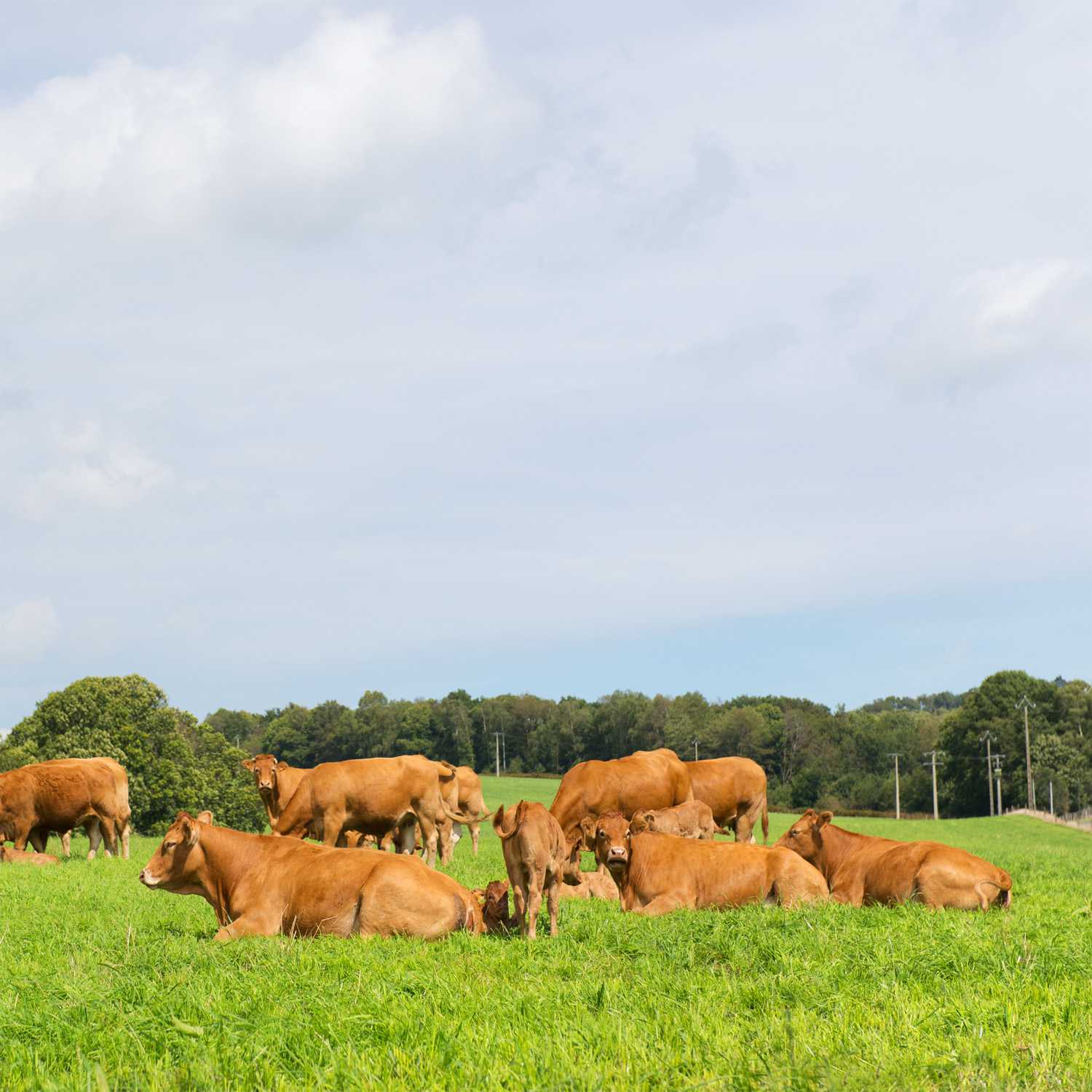 This all-purpose pasture mixture is an excellent choice for almost any area in the United States. It not only gives the great forage grasses, but gives you the added benefit of clover for higher protein and nutrition as well as highly palatable and quick establishing annual ryegrass.

This blend can work for horses in certain situations, but would be better for cattle, sheep, alpacas, and other grazing animals. Clover content may be too rich for some horses and alpacas.

This ryegrass possesses a very high disease resistance and tolerates close grazing. Fair to good winter hardiness has been reported in most trials. It is very well suited to management intensive grazing, but hay and silage management will work as well. When mixed with White Clover, ryegrass forms an unbeatable pasture.

Orchard grass is a rapid growing bunch grass which has the ability to grow on relatively poor soils. Orchard grass is generally the earliest maturing cool season grass. It is usually one week earlier in maturity than tall fescue and two weeks earlier than smooth brome grass. When selecting a variety consider finding a cultivar that is later in maturity and has resistance to rust. If adequately fertilized, production is distributed well through the growing season. It does well in drought and in dry land conditions. It produces high amounts of forage in the first harvest with a high capacity for re-growth. It will produce high amounts of forages in subsequent cuts as well.

Timothy is one of earliest grasses known in the U.S. A short-lived, winter-hardy perennial bunchgrass, it is often seeded in a mixture with alfalfa, clover, or birdsfoot trefoil. Adapted to high elevations and to areas of at least 18 inches of annual rainfall. Easy to establish, easy to handle for hay. Well known as prime horse hay crop. Used extensively for revegetation of forest land and for erosion control in many areas. Adapted to the fertile, moist, medium- heavy soils of the Pacific Northwest, and to the Great Lakes and New England states.

A deep-rooted, long-lived perennial bunchgrass. Thick stands will produce a tough sod if mowed or grazed. Vigorous, grows well on wet and dry soils. Tolerant of poor drainage, is also drought resistant; tolerant of both strongly acidic and strongly alkaline soils. Excellent for summer pasture and hay, also for erosion control. Yields well in areas of at least 18 inches of annual rainfall. Produces abundantly with irrigation and high fertility. Best seeded with legumes for added palatability and nutrition levels. While a vigorous plant, new seedings are somewhat slow to establish. Should not be grazed too soon, and not the first winter. Adapted to wide range of climatic conditions.

A tetraploid annual ryegrass has larger leaves, a higher water content, and better palatability than many diploid varieties. It will produce high quality feed for use as pasture, hay or silage. It was bred for vigor, disease resistance, and high performance. It is highly resistant to the major forage diseases including crown and leaf rust, leaf spot/scald, powdery mildew, and pythium blight.

New Zealand white clover is highly palatable, often used in pasture mixures. As a pasture plant, white clover yields are greatest in mild humid climates. Best adapted to well-drained silt loam and clay soils with a pH range from 6.0 to 7.0 in humid and irrigated areas. With adequate soil moisture and fertility, it can be grown on sandy soils. It is not tolerant of saline or highly alkaline soils. The plant is shallow-rooted, seldom goes deeper than 2 feet. For pastures, white clover is almost always seeded with grass to prevent bloat and reproductive problems. The flower color is usually white, but may be slightly pinkish.

Medium red clover is the most widely adapted of the true clovers. This short-lived perennial is grown in Canada and most of the U.S. except the Great Plains states and the southwest. mixes well with grass, used for hay, psture, and soil improvement. Fertile, well-drained loams, silt loams, even faily heavy textured soils are preferred to light or gravelly soils. Red clover will grow on moderately acidic soil, but yields are maximized when pH is 6.0 or higher. An early flowering type, it can produce two or three hay crops per year. Fits well into three and four year rotations. Red clover is used extensively in pasture mixes and for renovating old pastures. Grass should be included in clover mixtures for grazing to reduce chances of bloat. Rotational rather than continuous grazing will help prolong the life of the stand. Most plants produce rose purple or magenta flowers in the seeding year.