Crickets, beetles, grasshopper, warms and a variety of other insects will take up residence in a nice thick Bermuda grass lawn. Some feed on grass blades, some feed on grass roots, and some feed on each other. Luckily, Bermuda grass usually grows faster than the average insect can eat and we don't have to worry. In fact, a certain level of insect feeding can actually stimulate grass growth. There are, however, a few classes of insects that can increase in populations large enough to harm your lawn. These can be treated fairly easily with a soil insecticide or with natural products like Milky Spore. The best time for a once a year insect treatment is in late July or early August.

Insect damage usually appears as an irregularly shaped patch of discolored or brown grass in a lawn. When you think you have an insect problem;, look for another cause fist. Then, wait to see if the troubled lawn area expands. Only then should you worry about treating with a soil insecticide. Following is a list of insects that may trouble a Bermuda grass lawn. Don't panic! You may never see any of these bugs.

The most common problematic insects on Bermuda grass lawns in the South are white grubs. White grubs are the larval, soil inhabiting form of several different types of beetles. The most notorious beetle in the South is the Japanese Beetle, known for its voracious feeding on the Crape Myrtle grapes, ornamental cherry trees, and almost anything green. Japanese Beetles lay their eggs in lawns and grassy areas beginning in July. The eggs hatch as white grubs in Late July and begin a two month feeding frenzy on grass roots. As soil temperatures cool in October, the white grubs tunnel down 4-8 inches into the soil where they pass the winter. As the soil warms in the spring white grubs move to the surface, feed briefly in April/May, and then pupate into beetles. Of all insects, white grubs are the most pervasive lawn problem in areas where you commonly see Japanese Beetles. White grubs can be controlled with a granular soil insecticide applied in early August according to the labeled directions. Milky sport is a natural product that contains spores of Bacillus popilliae, a disease that kills white grubs. Milky spore will not kill every white grub, but spores will remain active in your lawn for many years.

While white grubs feed on Bermuda grass roots, there are several types of larval worms that feed on Bermuda grass leaf blades. They include cutworms and sod webworms. Unlike white grubs, larval worms can have several life cycles during a given growing season and are less predictable in their arrival. In addition, they are night feeders and hide in tunnels beneath your lawn during the day. Sod webworms leave behind a silken spider web on the surface of your lawn that you see first think in the morning. Larval worm damage usually appears in areas of brown or unevenly clipped grass. They can be controlled with a soil insecticide approved for use on Bermuda grass.

Armyworms are another type of larval worm that feed in masses throughout the day and night. They move quickly and can literally devour a lawn. Keep a lookout beginning in the late spring and through the growing season. Young larvae eat the edges of grass blades white the mature larvae eat the entire blade. Armyworms usually affect an entire sub-division at a time, so listen to our neighbors and state agencies for "Armyworm alerts". The worst outbreaks of large populations usually occur from July to October. If found, apply a soil insecticide approved for use on Bermuda grass. Damaged lawns can usually be revived with careful irrigation.

Billbugs are black, hard shelled beetles with a curved snout like a short elephant trunk. You may see them in the spring as they prepare to lay their eggs. The eggs hatch into legless white grubs that feed on Bermuda grass roots during the late spring and summer. Damaged lawns usually have circular areas of brown or yellowing grass. If you tug on the discolored turf, it will easily pull from the soil Billbugs can be controlled with a soil insecticide approved for use on Bermuda grass.

Mole crickets are a major concern in the lower South in sandy soils. These horrendous burring crickets tunnel through the soil at night, loosening the sandy soil and disrupting grass roots. Mole crickets are active throughout the growing season but are most common when night air temperatures remain above 60 degrees. Damage usually appears as if someone cultivated areas of your lawn. They can be controlled with a soil insecticide labeled for control of mole crickets and approved for use on Bermuda grass.

Chinch bugs can be a problem on Bermuda grass although they are most destruction on Saint Augustine and Centipede grass lawns. Infected lawns usually have irregular patches of yellowing or wilted grass in sunny areas. Chinch bug problems are most common in July through September. To confirm their presence, cut the top and bottom from a coffee can and bound it several inches into the yellow grass. Fill the insecticide of the can with several inches of water and maintain the water level for 5 minutes. The chinch bugs will float to the surface. Once you have located them, treat the area with a soil insecticide labeled for control of chinch bugs and approved for Bermuda grass.

Fire ants are a big problem. When you treat one mound another seems to appear. There are numerous entomologists working on the problem so hopefully they will find a control soon.

If moles are tunneling through your lawn, they are probably after white grubs. Treat for white grubs in late July/August and hope that the moles will go away also.

There is always another insect or pest that might plague your lawn. You might hear or read about ground pearls, nematodes, mites, viruses and a long list of other potential problems. In general, don't worry. Just keep an eye on things and treat problems when you find them. You lawn is tougher than you think. 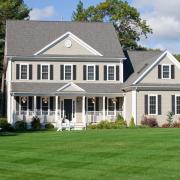 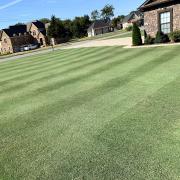 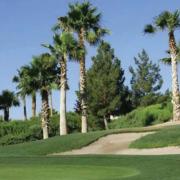 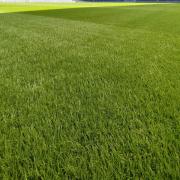 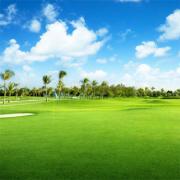